Did you Know? – Hanukkah

Home » Did you Know? – Hanukkah 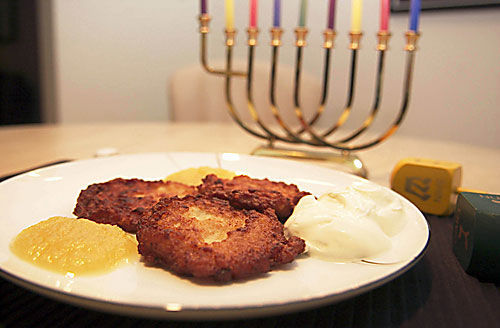 Did You Know?  – Hanukkah is one of the few Jewish holidays that is not instituted in the Torah. It commemorates a post-biblical event: the victory of the Maccabees over the Syrian-Greek rulers of Jerusalem and the subsequent rededication of the Temple in 164 BCE. It also celebrates a miracle that accompanied this event: When the temple was rededicated, God miraculously made one days’ worth of oil burn brightly for eight days.

A popular Hanukkah tradition is the game of “Spin the Dreidel.” A dreidel is a four-sided spinning top with the Hebrew letters nun, gimel, hay, and shin drawn on each side. These letters stand for the Hebrew phrase Nes Gadol Hayah Sham, “A great miracle happened there,” and they also stand for Yiddish words that represents the rules of the game: nit (nothing), gantz (all), halb (half) and shtell (put).

A customary Hanukkah treat that developed in Eastern Europe is the latke, a potato pancake fried in oil and served with applesauce or sour cream.