A Touching Subject – Part One

Home » A Touching Subject – Part One 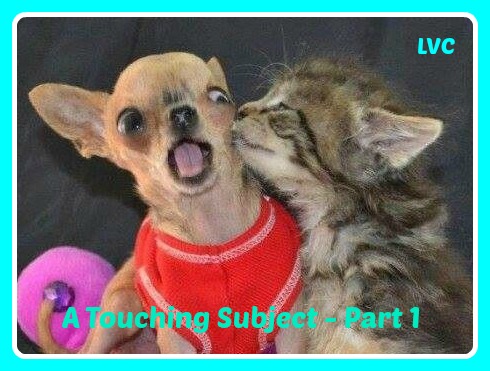 An animal’s instinctive response to touch is one of defensiveness. Mama dog, littermates, dog pals, and all the humans who touch your dog will help build the dog’s positive perceptions of touch.

The dog’s degree of sensitivity to touch is largely inherited and is included in temperament tests administered to dogs. For homes such as those having children, or for jobs like therapy dog work, a dog who isn’t very sensitive to touch would be preferred.

If a dog has an undesirable degree of sensitivity to touch, this can often be improved by appropriate conditioning. The sensitivity can be picked up on a test, but most of the time it’s detected by observing the dog’s behavior. If a dog seems unusually sensitive or insensitive, or if you are just curious, you can perform a gentle test to help quantify the sensitivity.

Though far from exact, this test is simple. Take the dog’s paw with one hand and slip thumb and forefinger of your other hand between two toes. Wait until the dog has relaxed, and then very gently squeeze the webbing there, not using fingernails. Gradually increase pressure as you count to ten, stopping pressure the instant the dog shows any reaction whatsoever, and even at number ten do not be pressing so hard as to upset the dog.

The number you are on when a reaction comes is the number you’re looking for. A higher number would indicate a dog not being very touch-sensitive, while a more touch-sensitive dog may react at number one. Note that the first sign of moving the foot or otherwise reacting in any way is the point at which you stop the pressure-you are definitely NOT looking to make the dog cry out.

Watch for “A Touching Subject – Part Two” next month, where we will be talking about handling physically sensitive dogs.