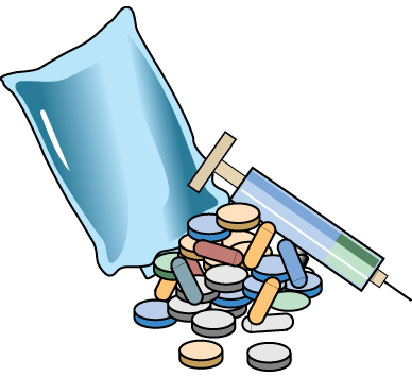 To a very large degree, a mammal is a mammal. The anatomy and physiology of dogs and cats are very similar to humans. It stands to follow that most pharmaceuticals have uses that transcend species lines. Almost all medications used in veterinary medicine have counterparts (often the exact chemical) in human medicine.

But just like humans, not all medications are safe and appropriate for all animals. And just because a drug can be sold without a prescription does not imply that it is without risk or side-effects.

No medications, even those sold readily over-the-counter, should be given without the expressed permission of a doctor.

When conditions arise that are not immediately life threatening or when there is a less expensive alternative to prescription medication, you may find a source of therapy right in your own medicine cabinet. Just don’t forget to ask your veterinarian first!

The list below will help you separate the good from the bad and the ugly. Purposely omitted from most of the list are exact dosages. Dosages are best determined by a trained medical professional…you got it… this means call the vet.

Did I mention you must call your vet?

Anti-inflammatories are used for a variety of reasons ranging from pain to heart disease. The most common OTC anti-inflammatories are called NSAIDS (non steroidal anti-inflammatory drugs) which means they do not contain cortisone. NSAIDS are generally labeled for the treatment of headaches and arthritis and would include drugs like aspirin, ibuprofen (Motrin), and naproxen (Aleve). Although it is not an NSAID, we will include acetaminophen (Tylenol) in this group as well.

Acetaminophen is highly poisonous to cats and can create liver problems in dogs. Ibuprofen and naproxen carry increased risks of upset stomachs and kidney damage.

In dogs, it is critical to use either baby aspirin or buffered aspirin in order to prevent GI side-effects, in case aspirin has been prescribed by their doctor. It is important to note that coated aspirin is not the same as buffered aspirin. Cats lack the ability to quickly metabolize aspirin, so small doses last for several days. In fact, aspirin is only given to cats once or twice weekly. A critical point to remember: never give acetaminophen (Tylenol) to cats!

Antihistamines are chemicals which block the effect of histamine, a chemical released in the body during allergic reactions. The most common use of antihistamines in veterinary medicine is for itchy skin symptoms, but might also be used for respiratory problems and for insect bites.

The most commonly used OTC antihistamines include diphenhydramine (Benadryl), clemastine (Tavist), Loratadine (Claritin), and chlorpheniramine. If your veterinarian directs you to use an OTC antihistamine, be certain to examine the label closely and be sure the product does not contain a decongestant. Many human cold and flu medicines contain antihistamines and decongestants, usually pseudoephedrine, which creates undesirable side-effects in animals.

The dosing of antihistamines is also different for animals. For instance, it takes a tremendous amount of diphenhydramine to work for a dog compared to a human on a pound for pound basis. Also, antihistamines are extremely variable in their effectiveness. In allergic dermatitis, for example, it is estimated that antihistamines work only 5 to 20 percent of the time.

What pet owner has not experienced vomiting or diarrhea from their beloved companion? Pepto-Bismol, Kaopectate, and diphenoxylate (Imodium) can all be used to treat small intestinal diarrhea. Antacids like cimetidine (Tagamet), ranitidine (Zantac), famotidine (Pepcid), and omeprazole (Prilosec) all have uses in dogs and cats.

What if your pet eats something that we need to get out? Syrup of ipecac, commonly used to induce vomiting in children, can also be used to create vomiting in pets in cases of toxic ingestion.

In the miscellaneous category, motion sickness can sometimes be alleviated with Dramamine and the antacid magnesium hydroxide is given as an adjunct to treatment of kidney failure.

Other than antihistamines for cold-like symptoms, the only other respiratory condition commonly treated with OTC medications is a cough. Products containing dextromethorphan and guaifenesin are safe for use in animals, but like the cold/flu products, cough suppressants often contain cocktails of ingredients we don’t want. Read the labels carefully!

Many minor injuries such as scrapes, abrasions, localized allergic reactions, and minor infections can be treated with topical medications. The difficulty in using topicals is that what you apply, your pet (if they can reach) can lick off. The trick is to apply topicals, massage in well, then keep your pet distracted for at least 5 minutes. Generally licking the medication is not harmful, but it won’t work on your pet’s tongue when we need it on the boo-boo. Common OTC topicals would include cortisone creams and antibiotics like Neosporin. Often a combination of the two will treat both infection and inflammation.

Ear infections are one of the most common, recurrent, painful, annoying, smelly, (I’m running out of adjectives) medical problems your pet can have. Since prevention is always the best endeavor, anything you can do to reduce the risk of ear infections is worth trying. If you have a pet with a history of recurring ear infections, or an animal that likes to swim, using a 1/2×1/2 solution of vinegar and rubbing alcohol can work wonders. Applied once or twice weekly and especially after exposure to water, vinegar and alcohol will prevent many ear infections. Don’t apply this solution to an already irritated ear… your pet will never forgive you.

Another handy topical product is saline, generally packaged for use with contacts. Using saline solution is a great way to clean wounds or flush eyes.

Hydrogen peroxide is also an acceptable would disinfectant, just don’t overdo it. With persistent or repetitive use, peroxide can become irritating.

We all want to take the best care possible of our pets, and commonly this leads owners into the wide world of supplements which would include but not be limited to products like vitamins, arthritis remedies, and dermatologic aids.

A strong word of caution: just because a label says “natural” doesn’t make it safe or even advisable. Many supplements may cause severe side-effects or interfere with other prescribed medications. Another point of concern is that supplements and other holistic products are completely unregulated. They are not under the control of the FDA or the DEA. There is no guarantee that what the manufacturer claims is in the bottle is actually in the bottle. Buyer beware!

That being said, there are some supplements that have very specific uses and can be helpful. Two chemicals that are commonly used in both human and veterinary medicine are glucosamine and chondroitin sulfate. Classified as nutraceuticals, these products help to slow the formation of arthritis and are best used preventatively. Essential fatty acids, especially in the group known as Omega 3 fatty acids, are helpful in treating allergic skin problems.

With any OTC medication, the message to take home is ALWAYS ASK YOUR VETERINARIAN BEFORE ADMINISTER ANY DRUGS.